Situational awareness. What is it? Ask anybody who doesn’t fly and they probably will not have any idea what a pilot is talking about. It’s a term commonly used by pilots when talking about mistakes made (hopefully) in simulators. It can refer to being aware of the configuration of the airplane, what equipment is inoperative on the ground or in the airplane, where an airplane is during any part of an instrument approach, or where it is located physically in reference to high terrain.

Pilots need to have excellent situational awareness when flying in difficult conditions such as airports at high altitudes and with high terrain surrounding them. Airports such as Quito, La Paz, Cuenca, Cuzco and others come to mind. Panagra operated into many of these types of airports by the nature of its route system, and they did so with piston-engine equipment that did not have the climb performance needed to be able to climb above the mountains in the event of an engine failure. Indeed, many of the prop types could not even maintain altitude with the loss of an engine at the altitudes of many of these airports. 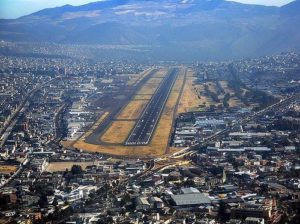 This necessitated training in what the crew had to do to avoid hitting terrain while the airplane descended with the remaining engine(s) at their maximum except takeoff (METO) power settings.  This “out” had to be memorized for every airport and every runway along the system. Pilots had to know what headings to take and for how many minutes and seconds to fly them before turning to the next heading. The same thing was true for getting the airplane into these destinations as well. It had to be this way because reliability with safety is what passengers require, and if an airline can’t deliver, it won’t last long.

Panagra pilots became legendary for their reliable and safe performance in these circumstances and this is what created a very loyal clientele in the countries Panagra served. The following story was told to me by my ex-Braniff flight engineer friend a few years ago, and is an example of this.

He said that he was going into Quito from Lima early one morning in the late 1960’s. He was pretty new at Braniff and had only been an engineer on the DC-8-62 for a few months, so he was not very experienced in South American flying. He knew that Mariscal Sucre Airport was a daylight-only operation and was pretty much a VFR type of operation. It did not have any ILS equipment installed and if the weather was marginal, it was usually overflown and the flight would go to Cali or Guayaquil. This particular morning Quito was covered with pretty solid clouds, so he expected that after holding for a few minutes, they would proceed on. Up front were a Panagra captain and first officer.

My buddy heard the first officer say something to the captain about seeing something through a break in the clouds, whereupon the captain started turning the airplane, closed the throttles, and started descending. He sat up and asked what the heck they were doing as the clouds wrapped around the airplane and darkness settled over them! The first officer turned and explained that it was okay, they knew where they were and were flying heading, time and airspeed. My friend said his heart was in his mouth as he pointed out that there are big mountains around here. What about them?

The first officer said not to worry, they’d done this before! As they were descending and leveling off and making turns, they were extending the flaps, then the landing gear and then the landing checklist. My friend was quite concerned to say the least! Pretty soon the first officer turned around and said the runway should appear in front of the nose in a few seconds, and like magic… there it was.

And they were almost perfectly lined up! After they landed he was given a briefing on just what they had done, all perfectly safe, and the passengers were now in Quito, which was just where they wanted to be. The boarding passengers would now be able to go where they wanted to go, and that is how my friend told me he came to have the utmost respect and admiration for the Panagra pilots at Braniff. He never doubted any of them again.